In a display of magic that would gobsmack Jon Dorenbos, the Philadelphia Union again made three points disappear on a Saturday night.

This time, it was a fluke goal from a substitute defender that ruined a strong rebound performance from Jim Curtin’s team. The difference was a 53rd-minute Josh Yaro red card, which turned an open and entertaining game into a boring, yet clinical display of bunkering.

It worked for 38 minutes.

Union players valiantly held down the fort while stifling waves of attacks from an unimaginative Atlanta team, only to watch a 20-yard loopy header go over Andre Blake’s head about 90 seconds from full time.

1. The mistakes are piling up

In four starts this season, Josh Yaro has:

We can go through the context of each mistake and point out that his teammates could have helped in each of those situations, but that’s the case for any defensive breakdown. It doesn’t negate the fact that he still made crucial errors that affected each game’s outcome.

It goes back to last year, too, when he was a rookie and the mistakes were expected. He had pair of red cards earned beyond the 80th minute of one-goal games. Philly lost both of those. There were also a couple of misplayed sequences leading to goals from Simon Dawkins and Kekutah Manneh.

It just looks like Yaro has regressed at a time when he’s supposed to be improving. He’s also suffered five injuries in less than two seasons, which creates a lot of doubt for his MLS future, at least in my opinion.

And the ultimate shame is that he had a good first half, with three blocks inside the box, six clearances, and just two wayward passes. He can be a top-ten MLS center back if he stops making these backbreaking errors.

He conceded just one foul and finished 3/3 in tackle attempts with an interception and three clearances. His passing rate was a respectable 79 percent with 22 of 28 attempts completed in a bizarre game.

The red card really changed the flow of the match, but key to Rosenberry’s performance was the fact that Atlanta’s left side of Greg Garza and Yamil Asad only logged one of their five key passes in the first half. The majority of penetration did not come until the second half and Asad’s goal did not even involve Rosenberry, as it was Roland Alberg who blew his mark on a short corner. 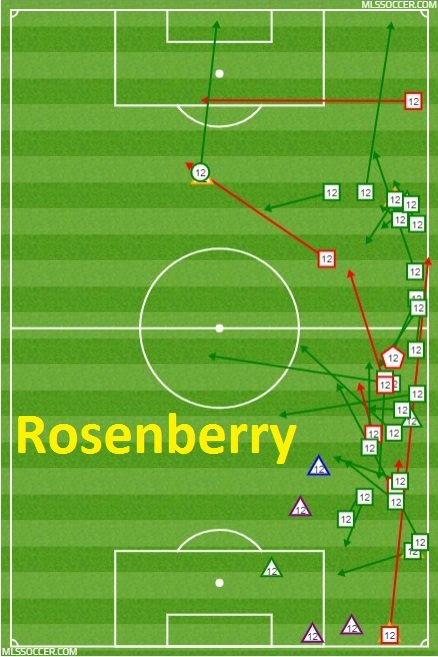 The other fullback played well, too, with an assist on the opening goal and one of his best defensive performances of the season.

On his side of the field, the combination of Hector Villalba and Anton Walkes (a converted CB) combined for only one shot and one key pass over the course of 90 minutes.

Alejandro Bedoya had one of his better games in a Union shirt.

He got his first goal at Talen (finally), broke up a ton of attacks and frustrated an excellent Atlanta front-four.

I read some comments later that blamed Bedoya for the late goal, but that’s hard for me to jump on that when you consider that it’s a fluke type of play in stoppage time.

As to whether or not the captain could have been closer to goal-scorer Tyrone Mears, here’s what he said after the game:

“(Andre Blake) comes out, I was at the back post and I thought (the ball) was going to go over him, past him, so I was ready to go to the right and then (Mears) came to my left and the guy just, you know, like I said, you got to get a lucky break. It’s a diving header from the top of the box and it goes over, but they didn’t have anything, they didn’t create anything and, if there’s one positive takeaway from this game, it’s that, you know, and I hope that we are able to keep our spirits high and continue and try to finish this season off on a good positive note.”

Here’s the play in question:

5. Atlanta really had no clue how to break down Philly

In the 40 minutes that they played with a man advantage, Atlanta managed only three shots on target. The 91st-minute equalizer was, fittingly, unassisted.

So despite the red card and a 53 percent swing in possession, Philadelphia actually finished the game with more shots on goal (6) than the visitors (5).

Atlanta just had few ideas when it came to penetrating the Union’s second-half shell.

One of the best ways to illustrate that is in the chart below, where you see the six key passes that Atlanta played from minute 53 to minute 95. You see that only two of those passes lead to on-target shots, while three of them actually went sideways or backward.

The 11-7 combination you see on the left is a quick free kick played from Miguel Almiron to Josef Martinez. The 7-10 combination is a one-two sequence where Almiron fired his shot straight at Blake.

Beyond those two plays, United simply could not find the right passes to create legitimate goal scoring chances.

Referee Drew Fischer had a shocker, though he got a bit better in the second half and he got the Yaro red card correct.

Twice he allowed play to continue with an injured player on the field, only to wait 30 seconds before changing his mind and blowing the whistle while play was ongoing. Both sequences resulted in unnecessary drop-ball restarts.

Three times he incorrectly failed to apply advantage, resulting in the stoppage of attacks for both teams.

And he didn’t set a first-half tone, allowing fouls to pile up while players jawed, dove, and ran into each other. C.J. Sapong was fouled five times and whistled for his own infractions four times.

7. Who pulled the alarm?

Did you hear the beeping noise playing over the loudspeakers during player introductions? It sounded like an eighteen-wheeler driving in reverse.

Turns out a fire alarm was causing issues with the Talen speaker system.

Appreciate it. Had to battle against a fire alarm that shut down the audio in the stadium but we made it.

At kickoff, it looked like the River End was going to 70 percent empty for this game:

The stadium filled in more as the match went on. This was what the River End looked like right around the start of play:

It’s still not great, but this is to be expected when the team is struggling and we’re nearing the start of school. College students are moving back to campus and this was the last shore weekend before Labor Day hits.

If you think this is bad, wait until the Union go up against the Eagles in October.

9. The Union should be one point out …

Wanna know how crucial those San Jose and Atlanta collapses were?

This is what the table would look like if the Union hadn’t choke both games away:

The problem is that the Union have played 27 games while Atlanta and Montreal have played 24 and 25, respectively.

Even if Philadelphia had taken care of business and closed out those games, the margin for error would have been extremely small for September and October.

I just don’t see a way into the postseason. The Union are actually closer to 11th place than sixth place.

In typical knee-jerk Philadelphia reaction, the popular thought right now is that Josh Yaro should sit his butt on the bench for the remainder of…

As we’ve seen so many times before, the Philadelphia Union found a way to take an excellent performance and turn it into a demoralizing result.…

It’s a question that seems to come up every Union season, when playoff hopes begin to fade as August gives way to September.  Why not…

In the immediate afterglow of the first playoff win in club history, Union coach Jim Curtin gleefully rehashed a painful story from his playing days…