It’s election day in Philly — and around the rest of the country — and at least one person figured out a way to cut to the heart of local voters by giving the entire city an important reminder. No, it wasn’t that one of the candidates, Joe Biden, is a noted Eagles fan. It was about his opponent, President Donald Trump’s friendship with Dallas Cowboys owner Jerry Jones.

We’ve seen countless political ads in recent weeks (read: months), but this might be the most effective one yet at firing up Philly voters. Take a look for yourself.

[UPDATE: The group Rural America 2020 has taken credit for the Donald Trump-Jerry Jones banner in Philly. Here’s another photo they provided of one of two banners they had flying around Philly for six hours on Tuesday.] 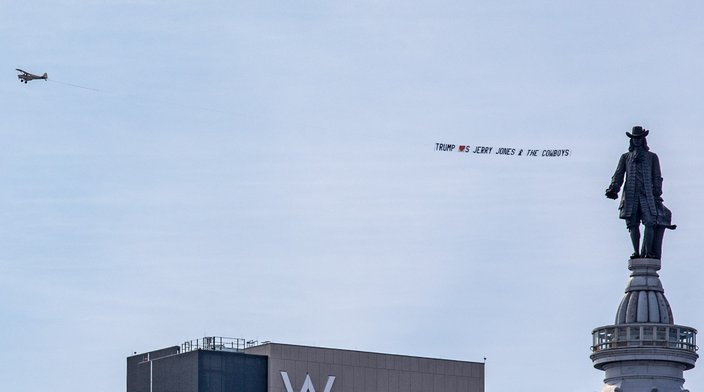 A look at the plane seen flying over City Hall on election day.

While political ads can often be taken out of context, this one is actually pretty factual. And we have the receipts…

A big salute to Jerry Jones, owner of the Dallas Cowboys, who will BENCH players who disrespect our Flag.”Stand for Anthem or sit for game!”

Spoke to Jerry Jones of the Dallas Cowboys yesterday. Jerry is a winner who knows how to get things done. Players will stand for Country!

As it turns out, the two have been friends for a long time. Dave Zangaro of NBC Sports Philadelphia has more…

But there’s also at least some truth to it as well. According to the Fort Worth Star-Telegram, Jones has had a “friendly relationship” with Trump for a long time but has recently been reluctant to publicly back him and alienate any member of the Cowboys fanbase.

But last month, when Trump tested positive for COVID-19, Jones made an exception and spoke very highly of the president.

“By the way, while we’re talking about that, I want to express my sensitivity and concern for the President,” Jones said on a radio appearance. “But, again, no one in the world has the ability to handle this COVID any better than the office of the President of the United States…. He’s the hardest worker you’ve ever seen. Knowing him, he’ll be able to go right on through and hopefully not miss a beat.”  [nbcsports.com]

While it’s also well known that Trump is close with Patriots owner Robert Kraft, his ties to the Cowboys go back considerably further, as Trump actually had a chance to purchase the team in 1983 but opted to buy a USFL club instead. The USFL has been defunct for decades, while the Cowboys are now worth just a little bit more than the $50 million they sold for back in the early ’80s. Like, 110 times more. Or, to put it another way, $5,450,000,000 more.

All jokes aside, this is the most important election of our lifetime. No matter who you are voting for, make sure you get to the polls to cast your vote before it’s too late.

By Harry Allison Dallas Mavs owner Mark Cuban is a self-made billionaire who started an internet radio business, Broadcast.com, sold it to Yahoo for $5.7…

Your browser does not support the HTML5 audio player. Donald Trump checks in with the morning team on election day to give his thoughts on…

By Arnie Ross President Donald Trump characterized NBA players kneeling during the national anthem as “disgraceful.” In an appearance yesterday on Fox & Friends, Trump was asked…

By Peter Gleason In a move that may further piss off Eagles Nation, which is red hot over their 4-11-1 record in 2020 and the…